This winter, I took part in a coral reef surveying project in Cambodia with Coral Cay Conservation. I was involved in a similar project in The Philippines in 2010, when I took with me, a Ewa Marine U-BXP 100 housing to use with my Canon cameras underwater – see previous post. The main considerations, as previously, were cost, weight and image quality.

I have been reluctant to invest in an Ikelite hard housing for my Canon 5D Mark II because it will only fit that camera and not the 7D and should I upgrade to the 5D Mark III, I’d have to buy another housing.

The Ikelite hard housing for the 5D Mark II is £1285 with around £300 extra for two different ports to fit different size lenses and a further £340 for an 8” dome port should I want to use a 15mm fisheye lens. A strobe light and fittings would add from about £460 upwards.

So, the Ewa Marine ‘bag’ housing had proved inadequate and the Ikelite housing too expensive. I searched for another option and found that Nikon had recently launched an underwater, interchangeable lens camera that did not need a housing, the Nikon 1 AW1. In this camera, Nikon had combined the robustness of the all-weather compact Coolpix AW110 with the core features of the Nikon 1 J3. It was marketed as the world’s first system camera with a 1in, CX-format sensor that can be taken to a depth of 15 metres. It particularly appealed to me because it could shoot RAW images. 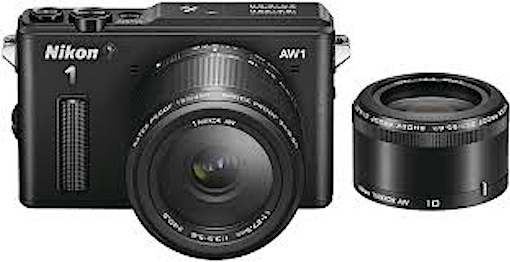 The first time I used it when snorkelling – it worked perfectly, as it did out of the water on the second occasion. However, it wouldn’t fire any shots the first time I dived with it to 9 metres and after that I discovered that the battery chamber had water in it with signs of corrosion. I tried using it again out of the water but the lens and LCD screen was fogged. Shortly afterwards, the camera broke down completely and wouldn’t switch on. I had followed the care instructions meticulously. I was now without any means of taking underwater photos for the whole 14 weeks of my trip.

On my return, Park Cameras gave me an immediate, no-quibble refund, I had paid £925 in total for the camera with two lenses and the silicon cover and Nikon have since admitted that it had been faulty.

As it was newly released, there weren’t many reviews available to read, by people who had used the camera, when I bought it in December 2013. There are currently, 4 reviews on Amazon’s UK site and 29 on their US site. Of the users that state that they dived with the camera, 45% ie. 4 users, experienced no problems but for 55% (5 users), the camera flooded and was unusable. Of the 4 reviews by users in the UK, the camera lens and LCD screen fogged, one camera was permanently unusable. One user, Oilman ‘Owen’, mystifyingly gave a 5* review for the camera even though it flooded on the first dive. Another user who gave 3* dived with it but didn’t like it. Most users were not taking the camera underwater and most were using auto everything.

To be fair to Nikon, more people who experience a problem are likely to write a review than users who are happy with their product. Also, there are plenty of reviews of other underwater compacts whose users have experienced flooding but they paid considerably less for their cameras than I did.

I barely used the camera but there were things about it that I didn’t like such as the lack of a histogram. Why have exposure compensation if you don’t have a histogram display to see the effect of the adjustment? For me, the lack of a viewfinder made manual focus impossible and autofocus was hit-or-miss. The image on the LCD screen was unclear for focusing in the water and, in the tropical sunshine, it was barely viewable.

It’s clearly designed for point & shoot users who will simply leave it on Auto. There are too many menus to scroll through to change settings for the Creative mode.

I will be going back to The Philippines next winter and will have to find another way to shoot underwater images of reasonable quality at a reasonable cost.