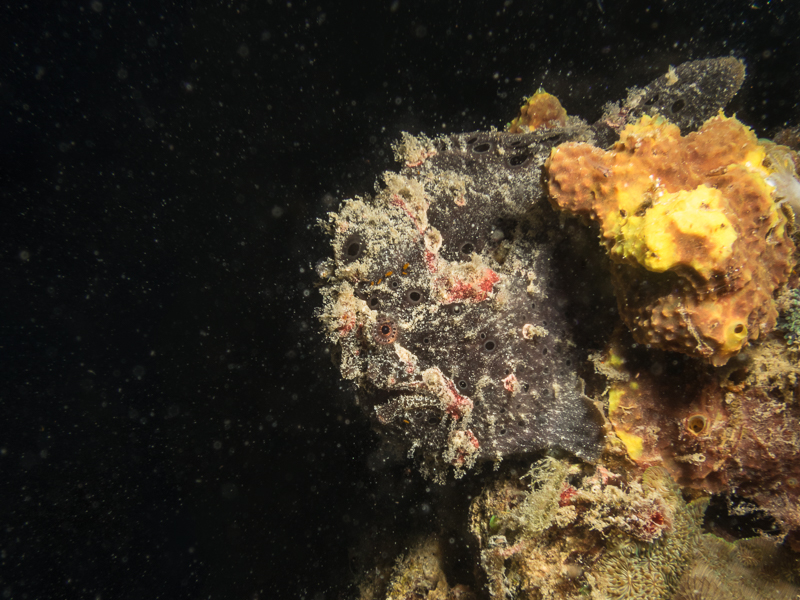 This Painted Frogfish has attached itself to the reef and is very hard to see. Frogfish disguise themselves with an array of spots, warts, stripes and other skin anomalies that allow them to impersonate surrounding rocks or plants. Try finding the eye! They keep very still waiting for prey which it attracts with a thin translucent lure. The spots on this one make it look rather like a sponge with holes over its surface and the black colouration indicates it may be a juvenile. It will eventually grow up to 21cm. 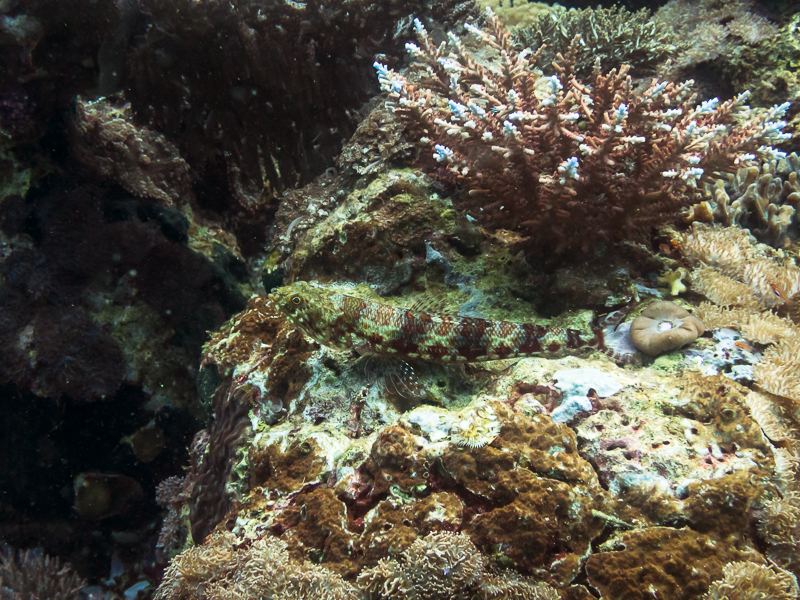 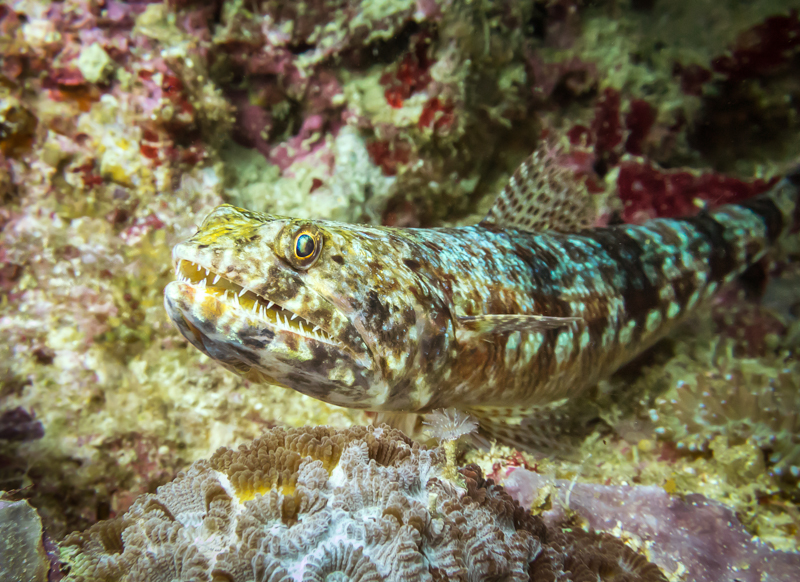 Missile-shaped Lizardfish are voracious predators with razor-sharp interlocking teeth with which to grasp prey. Their pattern and colouration, which they can change to match their surroundings, make them almost invisible. They are lie-in-wait predators, found on the seafloor or on rocks in relatively shallow water. Remaining absolutely still, with pectoral fins splayed out to the side and head tilted upwards, they scan the water. From this position they spot unwary prey and launch lightning fast strikes. They are common but so well disguised, they often go unnoticed. 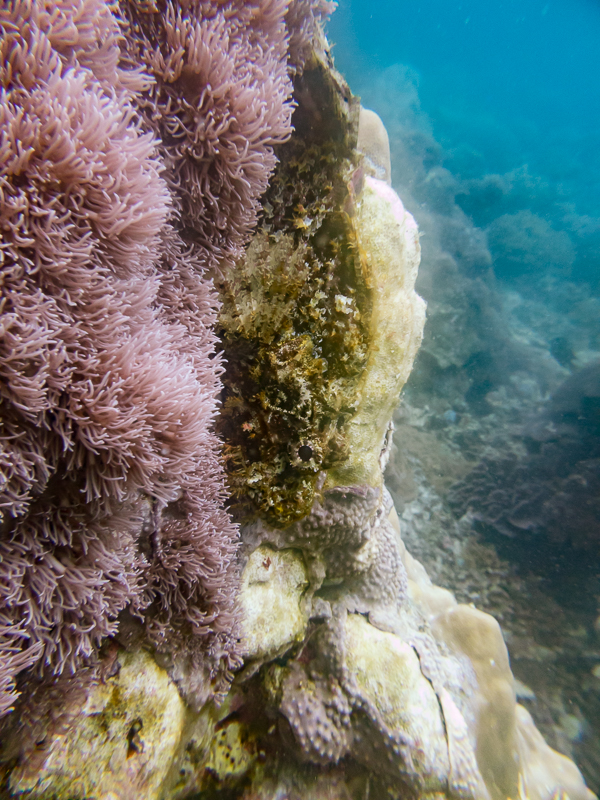 The Scorpionfish family is a large one with hundreds of species found over a wide area but mainly found in the Indo-Pacific. It includes some of the most venomous fish in the world. They are bottom-dwelling carnivorous ambush predators, inhabiting reef slopes from 1 to 35 metres and feeding on small fish and crustaceans. Like Frogfish, they are perfectly camouflaged and stay motionless, waiting until prey comes within striking distance.  The strike is faster than the human eye can see. Their venom, which is in the mucus that coats their sharp dorsal spines, is only used defensively.

It can reach a maximum length of 36 cm (14 in), live from 5 to 10 years and can vary considerably in colour. Adults are bearded with a number of tassels below the jaw.

Their near perfect camouflage and the venomous spines make them a hazard for snorkellers and divers in shallow water. 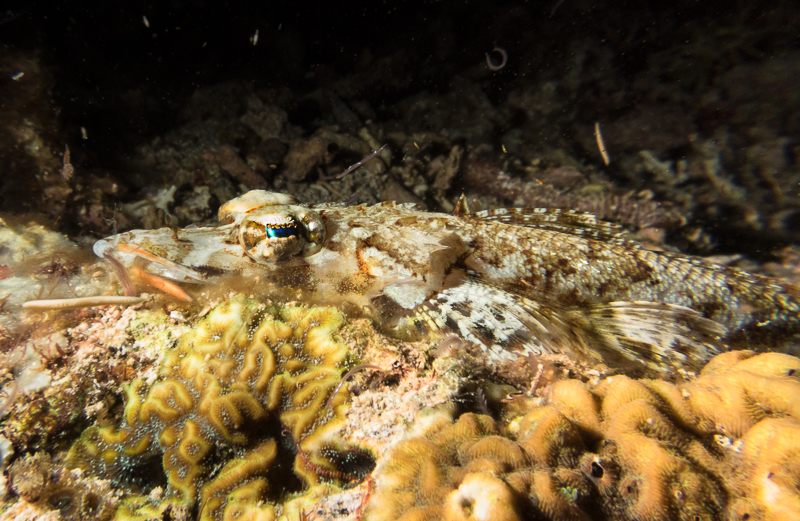 This is a very odd fish that gets it name from its crocodile like appearance though it only grows to about 50cm (20”) in length. It is a member of the Scorpaenidae order which makes it a close relative to the other ambush predators, the Stonefish and Scorpionfish. Crocodilefish are green or grey in colour with blotches that help them look nearly invisible on the ocean floor. These strange creatures are often found on the muddy bottom in the Western Pacific in places like Indonesia, the Philippines and around the Great Barrier Reef.

Stargazers are a family, of perciform fish that have eyes on top of their heads (hence the name). The family includes about 51 species found worldwide in shallow and deep saltwaters. They can make their eyes protrude to give a wider field of vision and their large, upward-facing mouth is fringed to keep sand out. They usually bury themselves in sand, leaping upwards with lightening speed to grasp prey in its large mouth, swallowing them whole. Stargazers are venomous; they have two large venomous spines situated behind their opercules and above their pectoral fins. Lengths range from 18 up to 90 cm, for the Giant Stargazer,  Kathetostoma giganteum.

Accidentally treading on any venomous fish will cause a very painful injury. Treat wounds immediately by washing with cold salt water then soaking in hot water for 30 to 90 minutes. The water should be as hot as can be tolerated to break down the venom. After those steps, visit the doctor for some anti-venom.